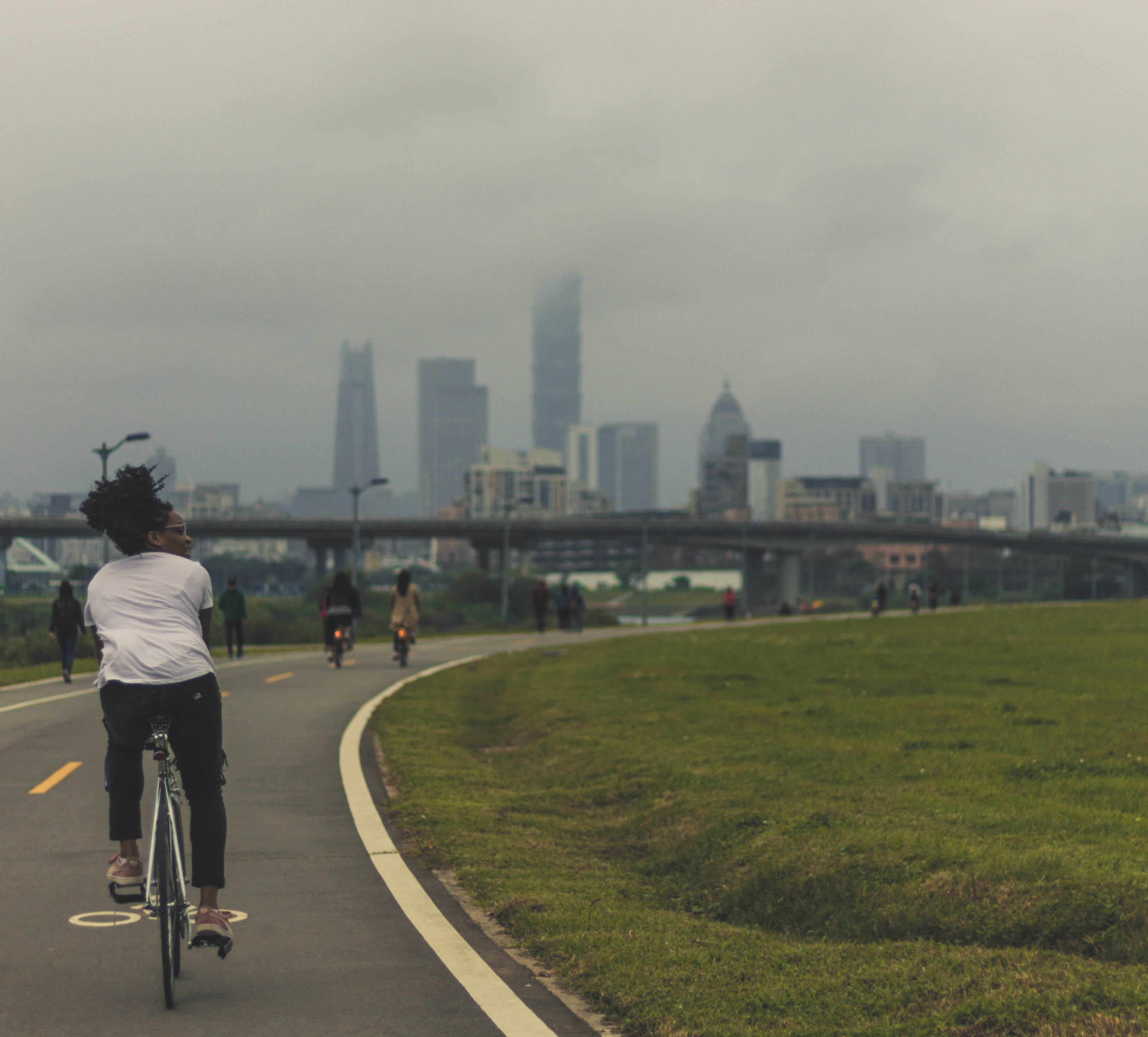 Riding a bike in Taipei is one of the most convenient but also can be the most nerve-wracking things to do. A lot of people ride in the city to get to places much quicker when the MRT (subway)/ bus cannot necessarily take them there. A lot of people also ride as a form of exercise. Taipei has a ton of bike trails that span across the city and lots of people take advantage of riding them whenever the weather is super nice.

If you’re just visiting Taipei for a short period of time or just want to ride to get to one place to another, I highly recommended taking advantage of Taiwan’s Youbike bike sharing program. are the lovely orange bikes which people can easily rent wherever and whenever. There are stations placed all over Taiwan, but the majority of the stations are in Taipei. You can typically locate a station by an MRT stop or in a very busy central area. They have an app where you can find the closest one or you can use Google Maps to find them.

In order to use the bikes, you must first buy an EasyCard from any MRT station or a Convenience Store (7/11, Family Mart, OkMart, HiLife) and top up your card with some money. From there, register your account at any Youbike Stations Kiosk using a phone number along with attaching your MRT card. Once you do that, you are ready to go.

Now before you take a bike and start riding, at the station, beside each bike shows a different light indicator. A green light indicates that the bike is ok and ready to ride. If the light is red, that means something is wrong with that bike and you can’t take it. If the light is blue, there is no bike there.

Now before you select a bike, you should always check the bike. Pull the seat up to your appropriate height. You know the seat is positioned correctly for your body if the seat is slightly higher than your pelvis area.

Also, check the wheels, make sure there are no flat tires and the gears on the handles are working properly. Sometimes, even sit on the bike (make sure the seat isn’t sliding down). If the seat is turned backward, something is wrong with that bike. Don’t take it. And if it’s the last bike in the docking station, double-check it for a lot of times, the last bikes are almost always the ones that have problems.

Now you are ready to ride.

Tap your card on the sensor and make sure to hold it there for at least three seconds before you hear the beep and the light goes down and slowly pull it out. Sometimes the bikes are in there tight so you may need to pull it out hard.

Now if you are in Taipei city, you have a choice of biking on the sidewalks or the street. Many of the main roads have dedicated bike lanes. And you know it is a bike lane if there are two parallel white lines with a bike logo on the ground. Sometimes they are shaded a different color to differentiate and some are even sparkly. but let me tell you pedestrians have no regard for them. People love to stand in them, walk and run with their dogs, push their baby and dog strollers, park in the god damn lane, chat with their whole ass family and so on. I feel like I spend more time maneuvering through people in these lanes versus actual riding straight through them. But it is best to ride on them especially during rush hour for safety, but once you get used to it, move to the streets. Just be careful, ride slow and pay attention.

A lot of smaller roads don’t have bike lanes so its best to assume that you ride on the street or avoid those roads and take the alleyways which can be fun to ride through. One can easily get lost through the alleys for a lot of the buildings look alike. But one thing to note while riding through the alleys, you have to be pretty careful of where you ride for there are one too many blind spots. A lot of the alleys are also one-way streets as well and it can be hard to spot them out unless you notice the blue one-way sign or big one-way arrows on the ground. Lots of drivers love to ride down the street in the wrong direction as well so be careful. Some others fly through intersections and I have had some bad encounters running into people because of this matter.

A lot of spots also have small circular mirrors hung up against a wall or pole which can be used to see if someone is coming from a different direction. Use them to your advantage. No need to poke your head out to stop and look, just take a look in the mirror and keep going. But if you are riding the wrong way (like me 99% of the time) I always have to stop and look.

Biking is not only just about knowing how to ride and using the breaks to stop, but also understanding the pattern of traffic and being aware of your surroundings. Everywhere you go and decide to get on a bike, the way people drive is slightly different. Understanding the flow of traffic and how the majority of the population drive will help you become a better biker. For example, in DC, a lot of drivers still aren’t used to bikers riding beside them, so I generally give more space when riding alongside them. Whereas in Taipei, this is not so much the case so many drivers will comfortably stand super close to the bikers (which freaks me out, but you know the deal). Understanding all the small nuances help you in becoming a better biker and become more comfortable biking in general.

In general, while riding, you have to be mindful of:

Beyond all of the nuances in riding, once you become comfortable with it, its really not too bad and can be super nice. Taiwan has hundreds if not thousands of nicely maintained bike trails throughout the country. In Taipei alone, it is said that their bike routes cover a little over 500km of this one city alone. 100km of it is along the river, at least 300km is dedicated for the road and the remainder is scattered across different parts of the city. Impressive right?

I recommend that if you are just visiting Taipei for a few days and are not really interested in riding the streets but more of the trails, take a look at my favorite trails in Guting Riverside Park and Dajia Riverside Park. These trails give you a nice view of the river, lots of different sites to see and are relatively flat and easy to ride. Also check out a full map here of some of the trails that are located in Taipei.

If you are not comfortable with riding a bike but want to ride, I recommend to just start on the sidewalks, and once you are comfortable, take it to the streets. Or even start riding out at night. The roads are empty during this time and the best way the get a good feel of the streets (minus all the cars) is riding out at night where you can make mistakes and not fear of being hit by someone.

When you’re done riding, find the nearest station by doing a search to Google Maps and insert your bike back into the stand and don’t forget to tap your Easycard after you place the bike back. For pricing, check out the information here.

I also had the chance to bike in other cities like Yilan as well as Hualien and I cannot lie that it is a really nice thing to see and do along many of the routes. I highly recommend if you come to Taiwan, do a bike tour or grab a YouBike and ride around the city on your own.