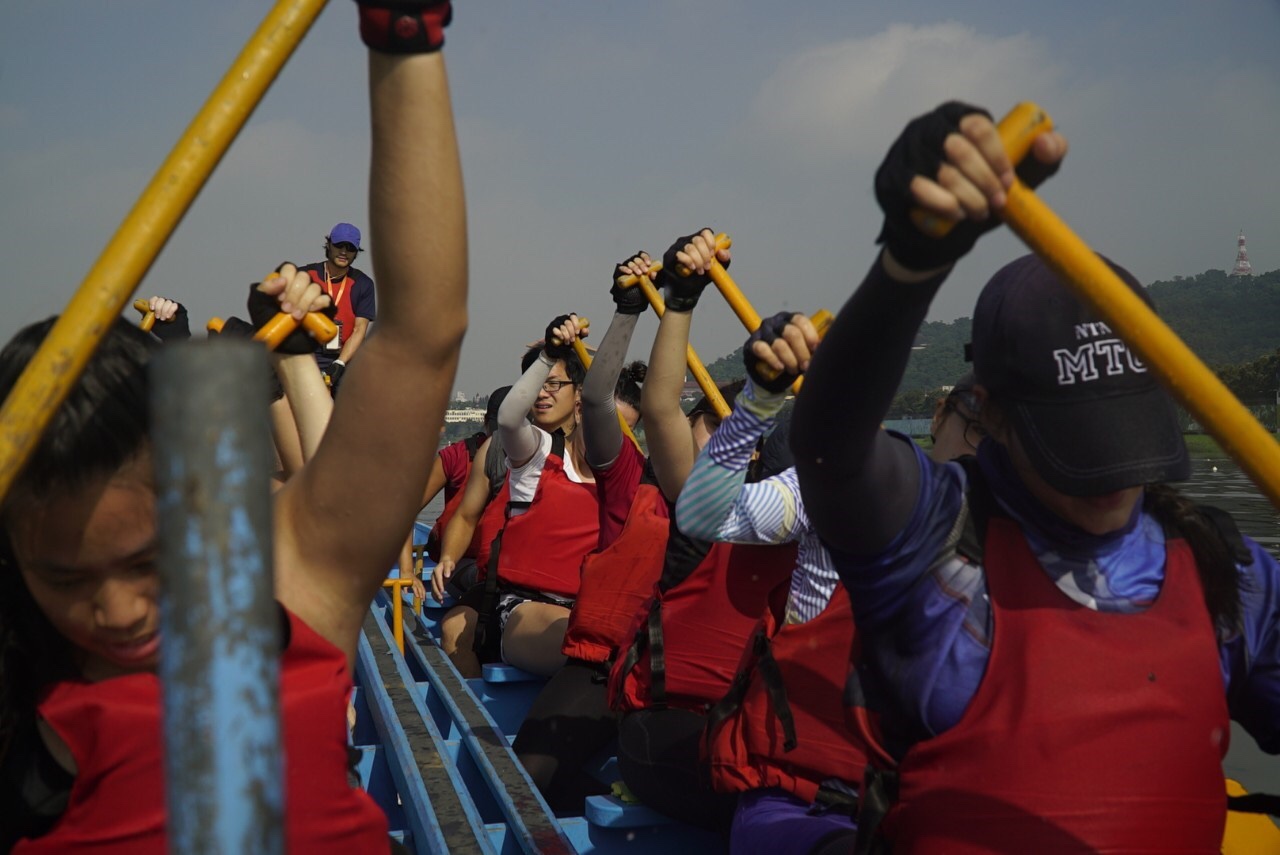 Every year on the fifth day of the fifth month on the Chinese lunar calendar, countries from all over the world celebrate the Dragon Boat Festival. This holiday commemorates the life and death of the famous Chinese scholar Qu Yuan. He dedicated his whole life to assisting the king to build the State of Chu stronger. When he died, locals rowed out on a river to search for his body but were unable to locate him. Gradually, rowing boats developed into dragon boat racing.

I chose to join my school’s Dragon Boat team to change up what I was normally doing. I have already been living in Taiwan for some time and was getting so bored with my everyday routine. School, Hang Out, Tutor, Bike, Sleep…I mean that just got so repetitive and dull. When I studied in Shanghai, my school also had a Dragon Boat team in which many of my friends participated in. But unfortunately, I left my program early and was unable to take part, but when I came to Taiwan and heard that my school, NTNU had a team, I felt as if a second chance was granted.

Contemplating for so long to join, I literally waited till the very last day to sign up. I went by the table without a thought and instantly signed my life away. Joining this was a very big commitment for me so in order to fully dedicate my time to it, I had to give up doing a lot of things:

We practiced 5 days a week from 6:30 am to 9:00 am and readjusting my body to wake up at 5 every morning was a challenge. I was used to waking up pretty early in the morning, but waking up to exercise was a task.

And from our first day at practice, I could already tell that many people who showed up either actively exercise or have some experience from working out in the past. For me as of recent, I mostly just bike, but even with that, it doesn’t help as much when it comes to rowing.

But back in my middle/high school days, I played soccer and ran track consistently. In college, I went to the gym here and there, an also played soccer with a lot of the international students. But compared to the exercises we did at practice, entirely different muscles are used while biking and amongst the other things vs. training for Dragon Boat. It has also been a very long time since I put all of these muscles to work and during practice, it showed.

The first few weeks were pretty rough. With 2 1/2hours of practice for 5 days every week, I haven’t exercised to this extent since my track and field and soccer days. My legs and arms felt like jelly, my shoulder joints were hard to move, my fingers felt smooth from the excessive contact I had with the tarp, and my core was on fire. It was very hard to get up in the morning for my body was so sore. But over time, my body became well-adjusted.

Within the first month, we trained mostly on the track field conditioning our bodies in which prepares us for the rowing. From running laps to doing various drill exercises, and lots of core workouts from planking to ab wheel exercises. And even done many exercises involving the use of the paddles.

I “generally” would pack my bag the night before practice. Wash some stinky clothes if needed and let them hang to dry the night before. Set my alarm for 5am, but I generally tend to get up around 5:45am. Throw clothes on and bike my way to practice. On the way, I buy something small to eat. Sometimes an egg, sometimes a sandwich, nothing crazy.

At practice, we began with 4 laps around the track which brings me back to those track and field days. Haunting. From there, we stretch and do our HIIT workouts and normally around this time, I felt the burn. But it didn’t stop there. We also would do everyone’s favorite (its a lie) planks, which involves your core and if it’s one exercise I actively neglected growing up, it was core exercises. And typically after the standard stretching and warm-up exercises, we would focus on a different part of our bodies each day from legs, core, upper body, etc. Every week we did something different. We almost never repeated the same workout which kept many of us engaged in the track training.

The second month in, we began our pool training which was done every Monday and Friday. We practice rowing but more so, particularly the proper motion movement of our body and our form with the purpose of attempting to put our fist in the water deeper with each and every stroke made. And most importantly, we also learned how to row in sync with each other. Did the men have a hard time doing that or what? Also, during the pool practice itself, we are not actually rowing, but instead, we sit by the poolside working on the movement in the water for 2 and a half hours straight. It was was a very monotonous exercise which easily got very boring and tiring, but also very well necessary in order to prepare us for the river.

In the last month, everything we practiced for came into a full circle where we finally began the river training. During this time, both track and pool training ceased. Every morning, we made our 10-minute commute by a shuttle bus to the Dajia Riverside Park for practice. Line up, suit up, and head on out to the river.

The first two weeks of the river training was everything but easy. The transition going from the pool to the river was so vastly different. For starters, we were in an actual boat. Sitting out in the water was a new experience for me especially for someone like myself who isn’t used to being on the water. I also noticed that my teammates were easily freaked out of how the boat felt with a simple tip from side to side. When it came to rowing in the river, we were actually pulling something so the feeling of the movement and our effect of how much power we put into each row was something you could truly recognize. And most importantly, our form. The way your body has to bend when you reach forward to pull back is a strange one. A feeling in which I never really felt I fully got used to. The leg placement in the boat was also very essential in how well you would row. Most importantly, our coach always stressed the importance of how far you can put your fist deep into the water. For it ensured that the boat could go farther in a shorter amount of time.

Out of all of the women on the team, I am pretty sure it was me, myself who struggled the most with my form in the boat. Being one of the tallest women on the team and one with much longer legs, the position most people were doing in the boat just wasn’t comfortable for me. I think I didn’t realize till the end of week 2 that my leg position simply wasn’t working for me. But with time, correction, and practice, a lot of changes were made to accommodate to not only me but other teammates, who struggled as well.

There were so many days we were at practice and I was dying and wanted to give up. Get me off this boat. I was thinking to myself. Some days were very difficult for week after week, the exercises got longer and harder. In our 3rd week, we did these drills focusing on our endurance. Our coach would ask us to row consistently, non-stop for 15 minutes. And we would go back and forth between fast strokes and normal long strokes. Those 15 minutes felt like an eternity. I literally died and came back to life within that time frame.

This time of the training is also where teammates suffer the most injuries. The most common ones were rib injuries due to the friction of the life jacket and also the abdomen area hitting your leg once you reach down and pull back with the paddle. It was said that the people who suffered these injuries were probably the ones rowing the best, but I beg to differ. There were also quite a few individuals who swallowed the atrocious river water suffering diarrhea and even a few eye infections. That river water was absolutely dis-gus-ting. The smell was so bad, but even worse, the contents in the river make you question the plastic consumption in Taiwan. We also saw various dead fish, cockroaches, and even a turtle.

But beyond the practice, it was the bonding time I had with my teammates outside of practice in which helped us grow stronger and closer as a team. After pool training started, at school, we had a classroom designated just for us where we would take this time to go and stretch out our muscles, watch the recordings of our practice to see how we can better our form, but mostly just fuck around. Close relationships were formed, memories were made, many inaccurate games of UNO were played, dance sessions, looking out of the balcony of the nice/shitty weather of Taipei, practiced our Chinese surprisingly, memes were formed, and overall just a good ole time. I could not go a day without stopping up on the 10th floor to at least say hi, share a meal together, even experiencing an earthquake. How much closer can we possibly get? These times solidified alone that for me that home is where your heart is and its currently right here for me in Taipei.

Friends can be made anywhere you go. Living life in a transient people like Taipei where people come and go so often can be emotionally and physically draining, but honestly, cherish those moments you have with those close to you. But also, set the expectations that they may not be here for long, and live it up like there’s no end.

Shout out to my Dragon Boat teammates for providing various pictures in this blog especially, Lyndon Claize who took the majority of the shots from the river.