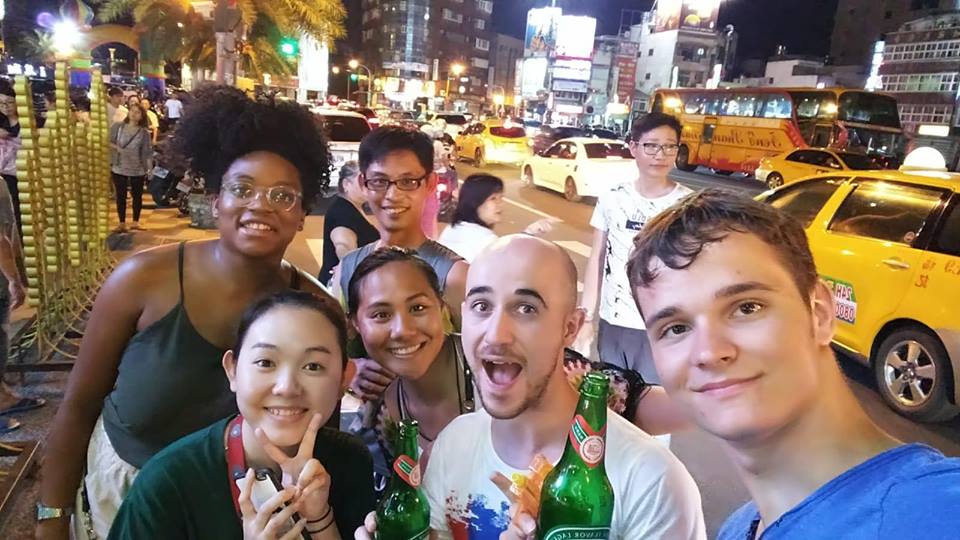 Moving to another city is one thing, but moving abroad is an entirely different thing. A lot of things come to mind when it comes to moving such as the changes in the environment, food, people, culture…it can be a lot for many. Especially if someone moving to a new place for the first time without knowing too much of the location or what to expect. But it doesn’t have to be that way.

Here are some simple ways to meet people abroad easily

Go on a walking tour

After A walking tour, a few beers from Family Mart, a dedication to Aretha Frankland, eating a large piece of chicken, and a long semi-drunk ride back home on a YouBike – there was a night that will never be forgotten.

I don’t know why it took me this long to go on a walking tour. But I went on my first one in Taiwan and was blown away by it. A walking tour is a great way to learn about the country’s history and getting to know the city on a local level. And because of my experience going on the tour, I was able to meet people and spend time with them for the weeks to come. I even met a local who I am still friends with to this day because of it.

We met at a bar during the World Cup finale.

I am not afraid to admit, but the majority of my friends I’ve met while living in both China and Taiwan consecutively have mostly been found in bars and clubs. Great way to meet foreigners and locals and to form close bonds with people for a lifetime.

With their ever so recent scandals on fake news and recording our convos us with a microphone, I know a lot of people have done the big purge and have been hesitant on using Facebook. But for me, the only real reason I still use it now is because of the facebook groups. They have a lot of them which gear towards something of one’s interests. In my case: travel. I am a part of at least 4 groups dedicated to travel. I could easily go to the group and ask for recommendations on where to go. Read up on the latest tea and even get a good laugh every now and then. In some cases, I could even meet up some people in person and travel the city together. It has and always will be a great resource towards that. I’ve even found my apartment now through Facebook. Don’t sleep on those FB groups.

Join a club gearing towards your interests

Recently gotten into photography again and had this taken by one of my lovely friends while on a trip outside of Shanghai.

This goes hand and hand with the facebook groups. You can find a club that gears toward your interests. Maybe you like to knit, go biking, how about a long motorcycle ride? They probably have it all. Great way to start is looking on Meetup.com for organized meetups. There are also many listings of events to be seen also on Facebook Events, Local University School Boards, and even Reddit.

These are all great starting points in creating potential friendships.

And a lot of people think that it is essential in knowing someone living in that place to make that move, (which does help the transition increasingly). But at the same time, I don’t think it should be the ultimate determining factor in making the move. Home is where the heart is. Friends and family members, of course, can’t be replaced back home, but you can meet just as amazing and heartwarming individuals abroad. With that, it can form and blossom new interests in ways people probably won’t expect.

Some of my closest of friends to date are those that I have met abroad. We don’t live anywhere near each other, but we find ways to stay in touch regularly and even see each other on multiple occasions.

Don’t be afraid of the unknown. Instead, be open, be adventurous, and also be you.